I really enjoyed meeting Prof. Gertz on Saturday (see previous post). A down-to-earth, sensible, approachable doctor who explained difficult concepts in a way that was easy for everyone to understand. I’m happy to say I learned some new things, and I also learned how to look at myeloma in a slightly different way…

As for my translation of the question and answer session, I think it went well enough. If I couldn’t think of a word in either language, I’d simply pause and ask for help. When that happened, I guess here and there I made a few funny faces, since I could hear people giggling. In such an informal setting, that wasn’t a problem, of course (I mean, my making funny faces). During the lunch break, an elderly lady (with myeloma) grabbed my hand and told me never to stop smiling my beautiful smile. Sooo nice! Oh, and I also met another blog reader. She came up to me before the meeting began, introduced herself and told me she’d wished she’d known earlier about curcumin (hah, she’s not the only one! So do I! But, better late than never…). And others later asked for my blog’s URL, so I hope they will get in touch with me at some point… 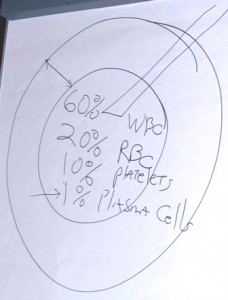 Before jumping into the meeting, I wanted to mention that Prof. Gertz didn’t use slides. I was surprised to hear that, but he told me that he uses slides only at official gatherings such as congresses. During patient-doctor meetings and when he meets with his own patients, he prefers to draw his own charts and figures (see photo; that long thing poking through the bone  and going into the bone marrow from the top right is a biopsy needle, by the way…brrrr…). He wants the patient/s to pay attention to what he’s saying, without being mesmerized by slides. Makes a lot of sense to me, and it adds to my appreciation of this doctor. Ok, now let’s have a look at his presentation (which Vittorio translated, so I was able to take great notes):

He said that if we buy a soup bone at the market and cut through it, the part inside the bone is called the bone marrow. Okay, so we all know that. But then he compared the bone marrow part to a “garden.” A healthy person’s “garden” contains the following stuff:

And then we have a final 1%. And that’s the plasma cells. In a healthy individual, that percentage NEVER changes, from age 1 to 81. It’s always 1%. With all the stuff I’ve read over the years, I didn’t know (or remember) that interesting little fact…hah.

Plasma cells. They’re important for our immune system. They produce huuuuuge amounts of antibody proteins that fight infections of all types. But in 4 out of 100000 people, the plasma cells become malignant. Their numbers keep increasing (= “uncontrolled growth”). And so our “garden” is invaded by myeloma cells, which he compared to “weeds.” As the weeds keep growing, they begin choking the normal cells. The red blood cells get hit the hardest…

And in fact 75% of all MM patients are anemic, which means they feel very tired and, e.g., can’t climb a flight of stairs…

Then the weeds begin spreading to what he called the “casing” = the area around the garden (that is, the bone). They begin to form “clusters” both in the garden and in the casing. Even the strongest bones can become weak, as a result. The clusters, he said, have the consistency of “raw liver,” so it’s easy to see that when our bones can break easily when they contain too much “raw liver.” He then talked about compression fractures in the spine and about how painful those are. He showed the movements that are the most painful for patients at this stage: movement from side to side, spine flexion. Even getting up off a chair or coughing and sneezing can cause a lot of pain. And so on.

But how does a doctor figure out that a patient might have multiple myeloma? Anemia and back pain could be caused by lots of different things. Besides, some patients don’t have any anemia or bone pain. They are the ones with low amounts of weeds in their garden…the ones without symptoms…These are the MGUS or SMM folks…

Another important note. Prof. Gertz said that if, over time, the protein is declining, then the number of cancer cells is also declining. If it’s stable, then the plasma cells are also stable. So this confirms what I’ve thought for a while: if everything is stable, it’s pointless to have any invasive tests. That’s the main reason I haven’t had a bone marrow biopsy since my third one (2007); my haematologist agrees with me, by the way.

Since it’s getting a bit long, I’d like to finish today’s post with the following gem (by the way, this won’t be the last post I’ll be writing about the meeting. As I mentioned, I took copious notes during the first part, when I wasn’t “on stage,” so I still have some interesting stuff up my sleeve…):

Prof. Gertz asked us what we do when our garden is full of weeds. Well, we go to a garden store and get a weed killer, right? (Uhm, truth be told, I don’t use any weed killers in my garden…they’re all waaaaaay too toxic, and my garden is 100% organic…I’d rather have a few weeds than a bunch of toxic herbs!)

Well, he pointed out, in a similar manner, when you go to an oncologist, you want your tumor cells removed. Therefore, he added, oncologists are nothing but “glorified gardeners.”