It’s been a long time since I’ve written a myeloma research post, but a recently published Korean abstract made my fingers itch to hit the keyboard. Here goes…

Remember ursolic acid? Well, perhaps not, since the last time I wrote about it was, oh, as long ago as 2007, the year I began blogging, in fact. What is ursolic acid? It’s a pentacyclic triterpenoid (yeah, I know, I know…) that can be found in a lot of foods, such as rosemary, apples, cranberries, pears, oregano, holy basil, thyme and prunes.

Back to the Korean abstract (the full study, from what I can gather, hasn’t been published yet), which I read about a half hour ago: it reports that the ursolic acid found in the root bark of Morus Alba, more commonly known as white mulberry, doesn’t just inhibit “the proliferation of RPMI-8226 multiple myeloma (MM) cells,” but it kills them, too. Oh yeah!

Conclusion: “These findings suggest that MRBE and its active ingredient, ursolic acid, […] may have significant chemopreventive potential against MM.” Very exciting, don’t you think? Of course, we must remember that this is a study that used MM cells in a lab setting (not human patients, I mean), so, as always, we mustn’t get overly excited. But still, a wee bit of excitement can’t hurt, right? 🙂

I have already ordered some white mulberry tea, while I do some more research to find a reliable source for ursolic acid (I hope to find the Morus Alba extract…but so far, I’ve found mainly rosemary extracts…). No idea if the tea will do any good, but at least it can’t hurt!

I had my bone marrow biopsy yesterday (BMB in English, BOM in Italian). The easiest I’ve ever had. It wasn’t completely pain-free, which would have been, methinks, impossible (after all, the needle has to penetrate your pelvic bone!), and in fact a couple of times I felt what I can describe as painful shockwaves running down my right leg, but no, nothing unbearable. And the BMB was also over quickly, compared to my three others.

After it was done, the nurse bandaged and iced me up and then asked me to turn over and lie on my back to apply pressure on the area. That was nice. My previous BMB doctors had simply said, “okay, you can get up now.” There was no lying about, no ice, no asking me how I felt, etc. 🙁

This goes to show that you can’t compare BMBs with other patients. Each experience is unique and depends mostly on who is performing the procedure. My previous BMB doctors had an aggressive approach, jamming the needle into the bone and making the procedure very painful for me and probably for all their patients, not just right there on the spot but afterwards as well. One of my worst BMBs had me limping for about a week. I remember it well.

But yesterday, as I said, I only had an insignificant amount of pain. The haematologist was as gentle as he could be. And today I am happy to report that I am fine. I don’t even have a bruise. Amazing. Now we just have to wait for the results, which will arrive late next month.

I’m quite pleased. This light-handed haematologist (who, by the way, was recommended to me by a member of my surgeon’s team) is now my new haematologist. The first thing that I liked about him was that he didn’t roll his eyes when, during our first meeting, I told him that I’ve been taking curcumin since 2006. On the contrary, he told me that some of his patients take curcumin (hmmm, blog readers, perchance?).

Stefano and I had a lovely relaxing holiday in August. The first leg of our trip consisted of three days in the medieval town of Sirmione on the shores of one of Italy’s largest and prettiest lakes, the Lago di Garda.

To be honest, though, I couldn’t wait to leave. 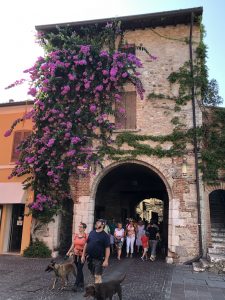 It wasn’t the heat that got to me (after Florence, practically anything would have felt cool…), but rather the throngs of unmasked tourists surrounding us as we walked along the town’s narrow streets. I found that quite unsettling. True, you don’t have to wear a mask now when you’re out in the open, but those streets were too narrow to be defined as “open,” in my opinion. Stefano and I wore our masks, of course (in addition to being fully vaccinated against Covid-19 and having our Green Passes).

We do plan to go back to the Lago di Garda someday, but never again in summer…too hot, too crowded…

By the third day of our holiday, we were more than ready for a change, namely for some cool air, which we  found at the Lago di Braies, known as the Jewel of the Dolomites. And a Jewel it really is! Lago di Braies is the most beautiful lake I’ve ever seen in my life. Its colours, ever-changing, were absolutely glorious. We spent a week in the (only) hotel facing the lake.

Our top floor room had a balcony with panoramic views of the lake and the surrounding mountains (see above photo). Stunning. I would have been happy to have spent the entire week on that balcony, reading and enjoying the views. 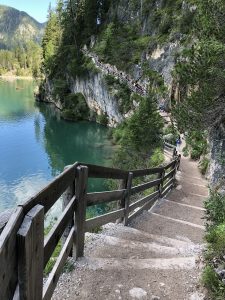 But we didn’t, of course! We went on rather long and sometimes challenging walks. I admit that in the beginning I was a bit concerned about my hip…But I have to say that even though we walked between 5 and 7 kilometres every day, I didn’t have much pain, if any. Really weird. The lack of pain may not sound like much, but when I get to my medical stuff later on, you will realise that it really is (was) a big deal. 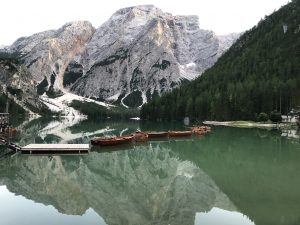 Check out the stairway (photo above, on the right) I climbed to get to the other side of the lake one morning. That whole path was up and down and up and down. Even regular hikers, in good shape, had to stop now and again to catch their breath…

But I’m so glad I did it: the views of the lakes and mountains were magnificent…

After a week at the Lake of Braies, we stayed a few nights at the nearby Lago di Misurina, another lake in the Dolomite range, mainly because of its strategical location near the Tre Cime di Lavaredo, the three most famous peaks in the Dolomites, and to Monte Piana, a very interesting World War I open-air museum located on a plateau at more than 2,300 metres above sea level, with amazing 360° views of the surrounding mountains. You can still see the trenches where the Italian and Austro-Hungarian soldiers fought for two years…Unbelievable…Anyway, highly recommended, if you are in the area. Again, my hip and I did quite a bit of climbing and hiking there, too.

On our way back to Florence, we stopped for three days in the city of Mantova (Mantua). I have nothing but high marks for Mantova. But, for reasons I cannot explain, it got harder and harder for me to walk for more than a few kilometres a day, if that…Odd!

Our holiday ended on August 28, when we finally got back to Florence and to our kitties who had been totally spoiled by our cat sitter. 🙂

In early September, I went through a battery of pre-surgery tests and met with various doctors.

My first meeting was with my orthopaedic surgeon and his assistant. When I told them about all the walking I’d done, especially around Lake Braies, they were visibly surprised. Speechless, in fact. It was there and then that I found out that my arthrosis is worse than I (we) had initially thought: I’m in stage 4 (the most advanced stage of arthrosis), not between stages 2 and 3, as it had seemed from my first X-ray. Yikes!

Looking back on our August holiday now, I have to admit that I feel a bit like Wonder Woman…hiking and walking for kilometres and kilometres with arthrosis in stage 4, I mean…Not bad, eh?

Getting back to my surgery story, I aced all the preliminary tests (electrocardiogram, etc.), but…yes, there is a but. My haematologist and I agreed that, before having this surgery, I should have some myeloma-related tests done, too. It makes sense.

My first test will be next week: my fourth BMB (bone marrow biopsy). Ouch! I am also going to have a PET scan and a CAT scan. In a nutshell, we want to make sure that I don’t have any bone lesions. If that is the case, no bone lesions, I mean, as I hope and imagine!, I will go ahead with the hip surgery as soon as possible.

If not…well, we’ll cross that bridge when (IF!) we come to it…

Let’s see, I guess that’s about it for now…