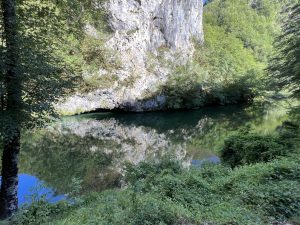 Last Friday was a holiday here in Florence…San Giovanni,  = St. John, Florence’s patron saint. So Stefano and I decided to spend the three-day weekend in an ancient village called Isola Santa ( = Saint Island) up in the Alpi Apuane (Apuan Alps), a mountain range in northern Tuscany. Isola Santa is perched on the side of a mountain and reachable by a rather steep walk down from the main road where we parked our car. 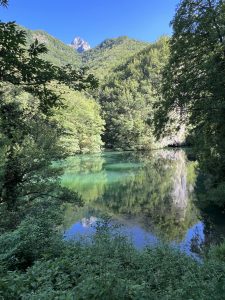 We were hoping to escape the horrendous heat wave that has hit Florence in this period…really awful, damp heat…

And, in part, we were successful, although it got warm there, too, during the day…but nothing like Florence.

We’d never been to what turned out to be a very interesting area of Tuscany, famous mainly for its marble quarries (Michelangelo!), which were clearly visible at many turns in the winding mountain road. 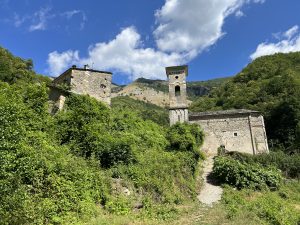 So…Isola Santa. The ancient, fortified village was originally built in the Middle Ages around a lodging for tired pilgrims and travellers…

In 1950, however, the inhabitants of Isola Santa were forced to abandon their homes, and the village essentially became a ghost town for decades. 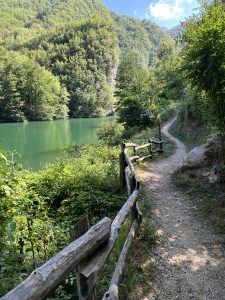 The consequences are still clearly visible…caved-in roofs, ruined walls covered with ivy and other plants, and so on. What happened was that a hydroelectric power station/dam was built upriver, creating an artificial lake that submerged part of the village, including the old mill (we saw some ancient ruins emerging from the water).

In 2001, though, a couple decided to bring the village back to life and embarked on an ambitious renovation project. To sustain the costs of this renovation, they began renting rooms and studio flats. They also built a restaurant and a café.

We stayed in a double room on the third and last floor of the ancient guard tower, with lovely views of the mountains and the lake and, of course, parts of the still-ruined village. 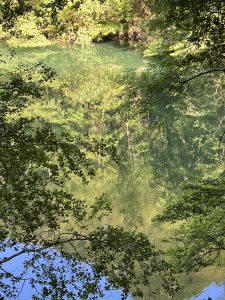 The village, its lake, and the woods surrounding it are super peaceful. Magical, really. Oh, and no TV, no Internet, no Wi-fi, very few people around. We spent two and a half days in almost total isolation from the world. Bliss. 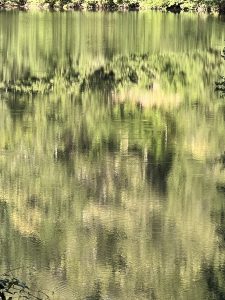 One of the most amazing features of this lake are its reflections…it’s almost impossible to distinguish a reflection from the thing being reflected (as in the last two photos). Paintings, almost…

Ohhh, and our walks along the lake, in the woods…wow. Such peace. No noise, apart from the wind blowing through the trees…The best was just sitting on a bench in the woods and listening to the water…to the wind…so relaxing…

Such a treat…such a lovely treat.

P.S. I took these photos with my cellphone…

Wow, what a trip! The villages, the scenery, the food and, of course!, the castles, the fabulous châteaux of the Loire Valley.

The towns we visited were Bourges (its cathedral is a UNESCO World Heritage site…but I remember Bourges best for its half-timbered houses, see photo 2, and its macarons, which were amazingly tasty, and, hey, I don’t really care for macarons, normally), Amboise, Chinon, Loches, Chédigny,  and, of course, Blois and Tours. Lovely Medieval centres.

And also a 12th century abbey, the Abbaye Royale de Fontevraud, where the body of Richard Lionheart is buried (but not his heart, which was embalmed and sent to Rouen, and his entrails, which were buried in Chalus…a bit gruesome, yes, but I thought it was really interesting) next to his wife and his parents.

Okay, here are a few of my million photos (the earliest ones, up to Villandry…I may post more in the coming days)…

Oh, a quick note: with my “new” (relatively speaking, since I had the operation in late November) hip, I walked between 10-13 kilometres a day without any problems. Up and down hills, up and down stairs, too. I was, and am!, very pleased!