I’ve been incredibly busy lately, with a million things to do, but I apologize for letting so many days pass without publishing even a couple of words here on the blog. That shouldn’t have happened…Anyway, sorry!

I hope to have enough time tomorrow or the day after to post about a couple of new SMM and MGUS studies I’ve come across recently. Right now, though, I have just enough time to post about the kitties. I know, I know. Boringgggggg! But I’ll make it up to you! 🙂

Let’s see…Last Thursday our vet pronounced Prezzemolo (our new kitten who has been very ill in the past few weeks, see previous posts) fully recovered…Hurray! 🙂 So Stefano and I decided to free him from my parents’ bedroom…finally!!!

Introducing a new kitty into a multiple cat household is not as easy as it sounds. You can’t just open the door and let the cats meet face to face. You have to introduce the newcomer gradually. If you don’t, the cats might never get along, which would really be too bad. Stefano and I have created our own introduction system that seems to work quite well. So here’s a summary of what happened this time…in a nutshell…sparing you lots of details… 🙂

On Saturday evening we shut three of our cats–Piccolo, Priscilla and Pinga–inside our bedroom (where we’d all been watching a film). Then we let Prezzemolo out of my parents’ bedroom. We decided to let him first meet Peekaboo (5 years old).

As soon as he set eyes on Peekaboo, he joyfully and playfully bounced up to her. As for her, well, she just couldn’t believe her beautiful blue eyes. “What the heck is this…THING???,” she seemed to be asking us. Whenever he got too close, she hissed and growled at him, so he’d stop dead in his tracks. But he’d fallen head over heels in love with her, and, as we know, love is stronger than fear, so he kept running up to her, meowing and chirping seductively. All he got in response, unfortunately, was hiss hiss and growl growl. This went on for some time… 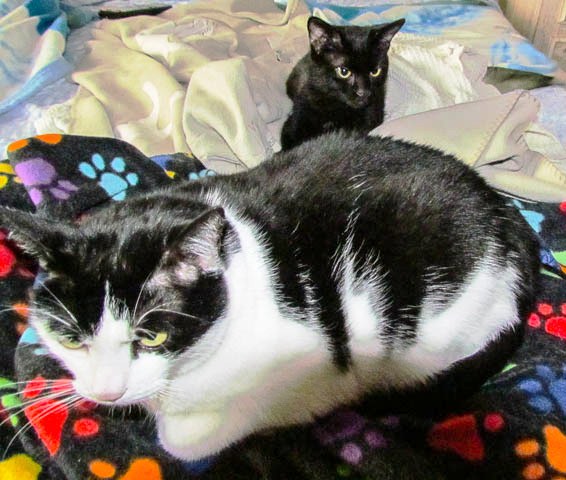 We finally put him back in his room but kept the door open a crack. Stefano stayed with Prezzemolo while I released the other adult kitties from our bedroom. One by one, they all came up to sniff the new kitty through the door. When it was Pinga’s turn, I saw a little black paw appear at the crack and tap Pinga right on the head. Spunky boy!

On Sunday morning we opened the door for good: hiss hiss growl growl, chase chase, whack whack. But no blood has been shed so far, no big fluffy tails have appeared…and that is a good sign. Another good sign is that Piccolo let Prezzemolo sleep on our (messy unmade sigh) bed yesterday, as you can see…

Then today Pinga and Prezzemolo touched noses, and she didn’t hiss at him at all…Yay! These two are going to love each other, I’m sure of it! 🙂