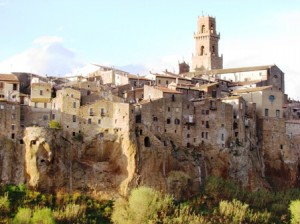 We had a memorable lunch in Pitigliano. Actually, come to think of it, we ate incredibly well everywhere in the Maremma. And (much) more cheaply than in Florence, that’s for sure. Anyway, if you ever plan to visit the lovely town of Pitigliano, let me know, and I’ll give you the name of the family-run trattoria where we ate the best “pici,” which is a type of handmade pasta, similar to fat spaghetti, traditionally made just with water and flour…but in this small restaurant the pici chef added egg whites to the pasta dough to keep the pici from disintegrating when thrown in boiling water…smart, huh? 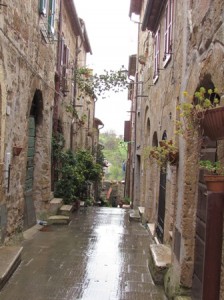 Pici all’aglione…mmmmh, finger-licking good. “Aglio” in Italian means “garlic” and “-one” is a suffix that means “big,” so “aglione” literally means “big garlic.” And in fact this recipe calls for a thick tomato sauce made with quite a lot of garlic (= big garlic!)… 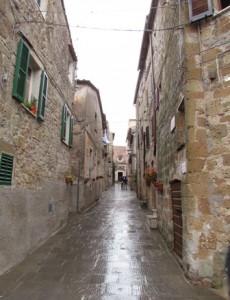 Based on the family recipe we were kindly given at the restaurant, you take out the slightly crushed garlic  from the tomato sauce before it browns, then you add a hot red pepper and finally a splash of vinegar…It’s a simple recipe, but you have to know what you’re doing…Stefano, who is the best cook I know (well, on second thought, he shares first place with my best friend here in Florence), made pici all’aglione yesterday, and we went into “pici” heaven again… 🙂

When we entered the above-mentioned trattoria, the sun was still out and it was warm enough for me to have taken off my sweater. But by the time we’d finished lunch, a very cold wind had picked up and it was pouring rain. 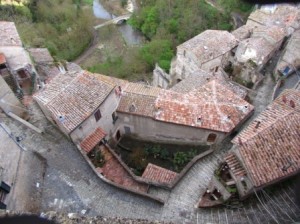 Luckily (!), I’d listened to the weather forecast first thing in the morning, so Stefano and I had stuffed our Skomer Island heavy and warm rain gear into our backpacks, even though there was no sign of a cloud when we first set out.

Covered from head to toe, the wind and pelting rain didn’t bother us. We continued our tour of Pitigliano…you can see the wet streets in two of my photos. Not a soul in sight…too cold!

By the time we left Pitigliano, the sun was out again. Weird weather! We made a quick stop at Sorano (photo no. four, zigzagging down, on the right. This is a view from the panoramic terrace, looking down toward the river), a small and ancient town built on a tuff cliff. But here’s a bit of advice: visit the smaller towns first, then go to Pitigliano, otherwise you will probably be disappointed…

The following day (Easter Monday) was an absolutely glorious, sunny day. So we decided to go to the Natural Park of the Maremma, which, by the way, was the first natural park in Tuscany: http://goo.gl/sYBd0 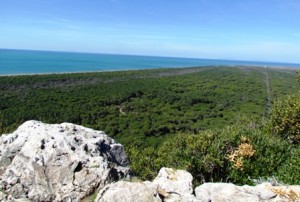 The trails were divided into “easy, intermediate and difficult.” We decided to take one of the intermediate, panoramic trails, called the A2 or “Two Towers” trail, which was about 6 kilometers long (= a three hour, non stop walk; it took us longer, since we stopped to take photos and/or rest).

The A2 trail takes you up a hill, through rather thick woods, all the way up to the ruins of a 12th century tower (called Castelmarino), a watch tower that was used mainly to spot pirates. As you can see, we had a splendid view of the Tuscan coastline from up there (photo no. 5).

Once you’ve rested a bit and taken in the views, not only of the sea but also of the mountains behind you, you are faced with a rather steep and treacherous descent (photo no. 6) on the other side of the hill. This “trail” was filled with warning/danger signs telling you to watch your step or else…! If you manage not to slip and fall 😉 , you will end up in a thick pine forest. Level ground…phew…relief! From there it’s an easy walk out to the beach. 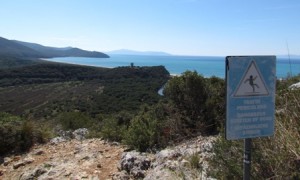 And the beach…ahhhh, what can I say? Stunning. You can see the islands of Elba and Giglio in front of you. Stefano wanted to hike up another cliff to the second watch tower, but I decided to stay on the beach and relax in the sun. Off he went (this is an important point, as you will soon see).

After resting a bit, listening to the idle, mostly food-related chatter of my Italian neighbors–entire families who’d brought huge luncheons with them, from pizza to sandwiches with porchetta (= oven or spit roasted suckling pig flavored with different seasonings), mmmh, even though I don’t eat porchetta, you’ve just gotta love Italians having a picnic!–I took off my socks and shoes, rolled up my jeans and stuck my feet in the water (note: nobody else did that…Yes, the water was coldish, but not THAT cold…but Italians like their water to be quite warm…). Ahhh, bliss. I walked around in the water for a while and hunted for seashells.

Suddenly I heard someone shout: “hey look, there’s a fox!” I turned, and there it was. A little adorable furry creature running down the dunes toward me. I rushed to grab my camera and took as many photos as I could. This is one of the best. And it’s not even “cropped,” so you can tell how close the fox got to me. 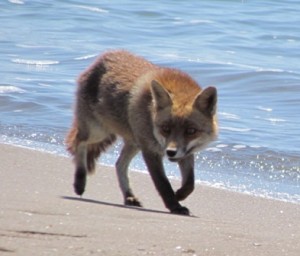 You’re not supposed to feed the wild animals in the park. In my opinion, there should be warning signs to that effect posted everywhere. But there aren’t. I have to admit that feeding the cute fox was my first instinct, too. But Stefano and I had brought only a bottle of water and a few cookies with us, so I couldn’t have fed the fox anyway.

Just as someone nearby was throwing some bread to the fox, one of the park guards came running and yelling “nooo, don’t feed the fox!” Thing is, you don’t want the wild inhabitants of the park to get used to being fed by humans. It could be really dangerous for them. Makes sense. But this fox didn’t know the park rules and was happy to grab the piece of bread and rush off down the beach…away from the guard and toward another family, probably…

When Stefano got back from his climb, I concealed a smile and asked him how he’d liked the view from up there. He said it had been nice, but that the view had been nicer from the first tower. Trying really hard not to gloat, I asked him if he wanted to see what I’d photographed on the beach while he’d been gone. “Sure,” he replied. You should have seen the expression on his face when he saw the fox. He was so disappointed that I didn’t have the heart to laugh at him… 🙂 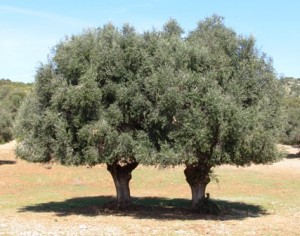 On our way out of the park, which included a walk through an olive grove (and there I took one of my favorite photos ever, here on the right), we encountered two more foxes. They came right out of the bushes, asking us to feed them (why else would they come so close?). If we’d had any food with us, it would have been really hard not to share it. Luckily, we had nothing with us. But both encounters meant that Stefano was finally able to come out of his “fox photo” funk. Of course, taking a photo of a fox on the beach is much more unusual than taking a photo of a fox in the middle of a pine forest (hehe, sorry, can’t help it)…

We left the Maremma in the early afternoon. But we vowed to go back there next winter to see the flamingos in the bird reserve…

P.S. Because of an increase in dumb “spam” attacks, the Healthblogs manager added some extra protection to my blog. Since then, though, I’ve noticed a decrease in the number of comments, and I’ve heard from some blog readers complaining they had so much trouble posting comments that they finally gave up. So I have a favor to ask: even if you hadn’t planned on commenting on this post (or earlier ones, for that matter), please do so, so I can check to see if the blog still has a “posting comments” problem. Thanks a bunch!!! 🙂