This morning, after re-reading the last bit of Dr. Biswas’ EBV-MM thesis, I began looking at another area of research, concerning myeloma, of course. But then I decided to take a break and write a KITTEN POST. The kittens are asleep right now, so I have some time to do that… 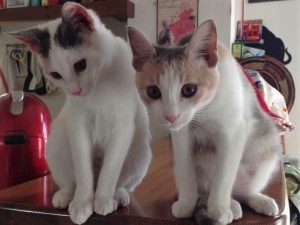 Let’s see. We let the kittens out of their quarantine room on Saturday, December 30, 2017. They had been in that room, full of games and a floor-to-ceiling cat tower, since the beginning of November, when we first brought them home. It took almost two months for them to get their clean bill of health: no more giardia (!), no more ear mites, and their booster shots. They were finally ready to meet the others, the adult cats.

When we opened that door, it was like opening the front door and letting two little kids go outside in the snow for the first time in their lives. Pandora and Pixie were bouncing all over the place, full of enthusiasm, happiness, and fun…A joy to behold. 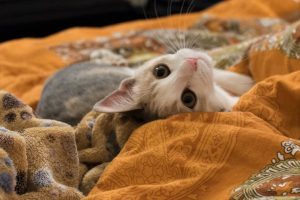 As for our adult cats, they didn’t quite know what to do at first. In the beginning, they just stayed on our bed (where they’d been napping, as usual), pretending to ignore the ruckus, the thundering noise of small paws rushing about madly on our cotto floors, exploring the house…

When they finally realized the noise (and the noise creators) wasn’t going to go away, most of them simply disappeared. Prezzemolo hid downstairs, in a small room under the kitchen, for two days…

But cats have to eat, right? And the cat bowls are all in our open kitchen/dining room area. That’s when the growling and hissing started. Hiss hiss growl growl hiss growl, whack. Yes, there was an occasional whack, too…

Thus far, the cat who is having the most difficult time dealing with the arrival of the two kittens is Peekaboo (10 years old). She still goes after them every chance she can get and growls at them even when they aren’t even near her. And they are really afraid of her. 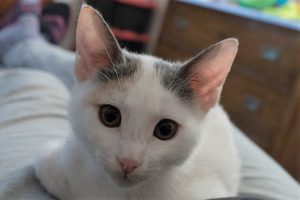 She doesn’t hurt them, mind you. No claws out, no scratches, nothing. It’s all just a lot of noise. When Peekaboo manages to chase Pixie into a corner, though, the screeches they emit still make me jump out of my chair and practically hit the ceiling. So LOUD!!!

The noise has been lessening, though…I think it’s simply because the kittens are getting better at avoiding Peekaboo.

The others are behaving much better towards the new girls in town. Pinga, in particular. I’m not saying they are cuddling just yet, but now and again we do have six cats lying on our bed, peacefully (minus Peekaboo, of course). So it’s going to be fine.

And I have to say that Pandora and Pixie are two of the happiest kittens I’ve ever had. They’re amazingly curious, and they do everything together, even when it comes to using the litter box (as they get bigger, though, I imagine that will stop!). 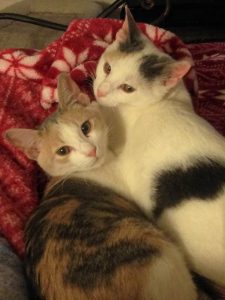 They follow me around like teeny tiny dogs. Everything I do is absolutely fascinating to them. The laundry, making the bed, oh just anything! And they are so helpful (not). It’s mostly okay, except when I’m cooking. They still don’t understand what “NO!,” “Go AWAY!,” or “GET DOWN!” mean. And even when I get them off the counter and put them on the floor, they’re back up within nanoseconds.

It was when Stefano was away on a business trip in mid January that I realized the only way I’d be able to eat ANYTHING would be for me to STAND UP IN THE KITCHEN, holding my plate as far from the counters as possible. These two little critters may be small, but they are also strong and athletic. And, as mentioned, QUICK. 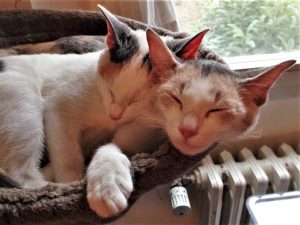 And even when it’s the two of us, Stefano and I are no match for those Olympic jumpers, and dinner at the dining room table can become quite challenging. If we get distracted, we end up with a paw smack in the middle of our plate or with a kitten stuffing her silly little face down into our glasses.

There are only two of them, but at mealtimes it’s like having an army of Pandoras and Pixies. Fast and determined, those two!!! 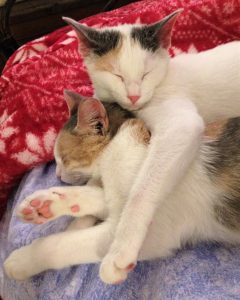 But who’s complaining? I certainly am NOT. Pandora and Pixie are the most adorable creatures on Earth. And they are soooo endearing. Early in the morning Pixie comes up to my face and wraps herself around my neck like a (very warm) scarf, putting one of her paws over my ear (so I won’t hear the alarm go off? How considerate!). I put my arm around her and hug her close, and she begins purring. Irresistible.

They cannot replace Puzzola and Piccolo, the two cats we lost last summer, but they have definitely made their way into our shattered hearts.

And they are helping us heal…For sure! 🙂

P.S. Some of these photos were taken with my cellphone and didn’t come out as well as I’d hoped. And by the way, if you’re wondering why these are mostly shots of the kittens sleeping or at rest, the reason is simple: almost impossible to get a decent photo these two in motion…they’re almost as bad as puffins in flight! 😉 But…I’m trying!